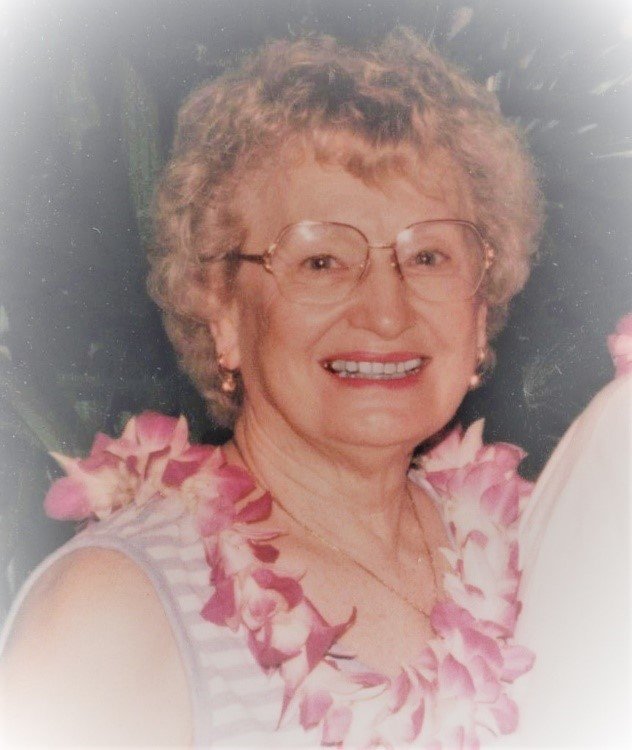 Plant a Tree
Share this Tribute:
Share Obituary:
Share Your Memory of
Esther
Upload Your Memory View All Memories
Be the first to upload a memory!

Beloved wife, mother, grandmother, and great-grandmother, Esther Travis died in the early morning hours of October 19th. She is survived by her son, Lou, grandson Zachary, and great-grandsons Cooper and Porter. She is interred at Wilhelm’s Portland Memorial mausoleum with her husband, Earl Travis.

On a fine Sunday in June, 1926, Esther Marilyn Travis was born in the house her father built in Logan, Oregon. The youngest daughter of Louis and Effie Kohl, she grew up in the country on the family farm. Upon graduating from Oregon City High School in 1944, she set out on a life of travel with her loving military husband, Earl, whom she had married on Valentine’s Day during her Senior year. Their son Lou arrived in 1947 and joined them in living wherever Earl was stationed, which included many places across the United States, and also England. The family finally settled in the Moreland/Sellwood neighborhood of Portland in 1962, upon Earl’s retirement from the Air Force.

As a way to help out while Earl attended schooling for a new career in the financial industry, Esther picked up a job as a waitress at the Top of the Cosmo restaurant in Portland. She stayed there for many years, even after Earl was out of school and well on his way. Though busy with work, she always made plenty of time for her friends, family, and neighbors, becoming a bowling champion along the way, as well as quite the card shark. Really, she just loved playing games: dice, cards, Scrabble, dominos, you name it. She even did pretty well at video games, playing the Atari 2600 with grandson Zachary at the family cabin in Camp Sherman, and (much later) beating her great-grandsons Porter and Cooper at bowling on the Nintendo Wii system.

Earl and Esther lived modestly, but it was so that when they wanted to pick up and go, they could. And go they did! They visited many countries in Europe, saw the pyramids in Egypt, and even took a rail trip through Russia. After her beloved Earl passed away in 2004, Esther beat the cold Oregon winters by staying with her son Lou at his beach house in the Yucatan area of Mexico. But though she visited many tropical places, including the Caribbean Islands, there was no place held so dear to Esther’s heart as Hawaii. Whether it was in the beach cabins at Bellows Air Force Station, or in their condo in Waikiki, Oahu was her favorite destination. And while many say that Waikiki is too touristy, Esther loved it for just that reason. Where else are there so many places to shop?!

Though we’ll always wish we had more time with her, we’re so fortunate for the time that we had. This past year, her great-grandsons lived closed enough that they could walk down the street and visit any time, whether it was for the daily ice cream social hour (dessert was her favorite meal!), or Bingo on Friday nights. Esther never turned down an opportunity to go watch the boys perform, and she loved it when Porter would play the piano for everyone where she lived.

To know Esther was to know what a million-dollar smile looks like (and not just because of the gold in her teeth!) She had a way of cheering people up and turning frowns upside-down. Her stories were magical and her memory for dates, details, and places was second-to-none. She was the de-facto Travis/Kohl/Kirchem family historian, and we can all only hope to do as well in that department.

A celebration of life will be held at the Oregon City Elk’s lodge on Sunday, November 24th, from 2-4pm.