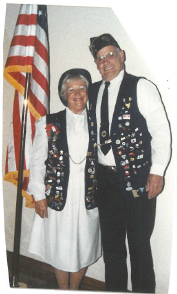 Plant a Tree
Share this Tribute:
Share Obituary:
Share Your Memory of
Darlene
Upload Your Memory View All Memories
Be the first to upload a memory!

Darlene passed away unexpectedly on Friday, August 9th, at Willamette Falls Medical Center with family by her side. She passed away due to complications from a surgery on July 23rd. At the time of her death, Darlene was living at Homewoods Retirement Community, on the Willamette, in Milwaukie, OR.

Darlene was born to Freeman Vanderhoof, Jr. and Jean Vanderhoof on September 15, 1931, in Portland, OR. She was the only child. While Darlene was growing up, her parents divorced; her mother remarried Elwood Ader. Darlene herself married at a young age. After a few years, they divorced but stayed friends. She had no children with her first husband.

She graduated from high school and got a job at the Federal Reserve Bank in SW Portland for a number of years. Darlene then met Edward Bos, and they were married in December of 1959. She became an instant mother at the age of 28. Ed had two daughters from a previous marriage: Linda, age 12, and Janet, age 9. Now Darlene had her hands full! Ed was nine years older than Darlene; now their family was complete.

They had a cabin four miles outside of LaPine, OR, on ten acres of land. LaPine was a very small town back then. Everyone knew everybody. Aunt Etta and Uncle Don had another ten acres and a cabin on the other side of Darlene's family. The family all built their own cabins, and many good times were had.

When Ed retired at an early age, they moved into LaPine, and sold three rentals they had in Portland. Darlene and Ed both joined the American Legion, Post #45, in LaPine. They helped build the new lodge from the ground up, constructed from logs. Darlene was the president of the Ladies Auxhillary, and Ed was the commander, both in 1988 and 1989. They traveled to Legion conventions across the United States, and Darlene had pins to prove it.

I could go on and on about her life, too much to tell.

Darlene loved the sun, swimming, fishing, crocheting, bowling, shuffle board, and pool. She loved to travel, and took several cruises.

She will be missed.