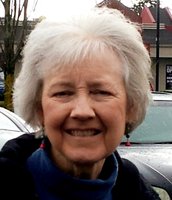 Before the sun rose on Tuesday, January 29, 2019, our dear sister, Joanie, went to be with our parents in Heaven, exactly 2 months short of her 74th birthday. She is now at peace and has escaped her battle with Parkinson's that she had so bravely and positively dealt with for the past 20+ years. She will be missed by so many who have loved and enjoyed her spirit for years.

Joanie was born March 29, 1945 in Portland OR to her late parents of Carl & Mildred Gudmundson.  She was the oldest of 4 children (2 girls then 2 boys several years later) and attended Glencoe Grade, Washington High and some college in Portland Oregon.

Her first love was ice skating and she practiced every minute she could, which perfected her skills and allowed her to receive gold status and became an instructor at Lloyd Center.  Summers were spent in Sun Valley ID on the ice.

During her high school days, Joanie joined Bethel #3 on 39th & Hawthorne and became Honored Queen in 1961. Her scrapbook of activities is over 4” thick, a testimonial that when Joanie did things she did them in a big way.

After high school Joanie traveled in Europe for 7 months with her sister, camping out in her Volkswagen, and visiting 13 countries in all.  She met many people, but the most memorable were 3 Australian ladies she has kept in touch with ever since.

She also managed to find time to join many friends at Camp Namanu for 1-2 weeks during the summer, as well as weekend camp-outs throughout her life.  She was a member of the Camp Namanu Alumni Association.

Somehow Joanie managed to find time for gardening and had Franklin Greenhouse where she grew and babied her plants and flowers.  Her yard was absolutely gorgeous.

As Joanie approached her 50th birthday she was diagnosed with Parkinson's, but never let it control her.  She stayed positive and active to the end.  Her house was sold several years ago and she moved to an Assisted Living in Portland where she remained until departing this earth.

Celebration of Life for Joanie will be held Saturday, March 9, 2019, at Rose City Yacht Club, 3737 NE Marine Drive, Portland (next to Salty's on the Columbia) at 1:00pm in the afternoon.  Light refreshments afterwards with an open mic.  I know she will be looking down on each and every one who touched her life.

In lieu of flowers the family requests donations to PARKINSON'S RESOURCES OF OREGON; 8880 SW Nimbus Ave, Ste B; Beaverton, OR 97008 or on their web site at: http://www.parkinsonsresources.org/ (scroll down on the left to DONATE NOW)  Thank You.